The chronic plight of the Palestinians has been largely overshadowed by the current massacre in Aleppo. Thus, Security Council resolution 2334 was welcome news to the cause of Palestine, and humanitarian causes around the world as a whole.

US abstention on the Security Council vote was described as “an abandonment of Israel which breaks decades of US policy of protecting Israel at the UN.” In 2016 alone, the US armed Israel with at least USD 10.2 million military aid per day, and over the next 10 years, the Obama administration has pledged a further USD 38 billion.

President elect Trump, hell bent on the annexation of West Bank and Jerusalem failed to force a twitter veto or overturn the Egyptian vote, the second largest beneficiary of US assistance after Israel. His appointment of David Friedman, a far right pro-settler, as US ambassador to Israel, spells difficult times ahead for the Palestinian liberation movement. Friedman has directly raised funds to support illegal settlements in the West Bank, of which the Trump foundation are generous contributors.

The Israeli Prime Minister’s Office has described the resolution as “shameful” and has vowed to defy the world body. This is hardly surprising, because they have out-rightly rejected the previous 77 UN resolutions against the state of Israel.

This symbolic victory on the global political stage has further isolated Israel as a pariah state internationally and reaffirmed her as a 21st century apartheid state as clearly described by Desmond Tutu "reminded me so much of what happened to us black people in South Africa."

Ronnie Kasrils, a Jew and former South Africa Minister of Intelligence described it as much worse than apartheid, “The Israeli measures, the brutality, make apartheid look like a picnic. We never had jets attacking our townships. We never had sieges that lasted month after month. We never had tanks destroying houses. We had armored vehicles and police using small arms to shoot people but not on this scale.”

Like it’s predecessors, Resolution 2334 lacks the political will and power to sanction Israel for failing to comply and Israel continues to seize Palestinian land and exponentially build settlements whilst the world body issue resolutions with no bite.

Despite this, the passing of this resolution brings hope to this long-standing cause and lays the ground for Palestinians to begin legal process against Israel’s flagrant violations of international law through the International Court of Justice.

It is no more business as usual because multi-national corporations are now more wary of doing business in Israel or linking with Israeli companies on occupied land. This has been further enhanced by the Boycott, Divestment and Sanctions (BDS) movement. Major multinationals, including Veolia, Orange, G4S and Irish building materials corporation CRH abandoned their involvement in Israeli projects following unrelenting BDS campaigns

The BDS call upon international civil society organizations and people of conscience all over the world to impose broad boycotts and implement divestment initiatives against Israel is now mainstream and winning support from the European Union, governments of Sweden, Netherlands and Ireland, as well as from Amnesty International, the International Federation of Human Rights, political parties, trade unions and social movements across the world.

It signals the continuous shift in the narrative of this conflict and the world's frustration and abhorrence of Israel’s regime of occupation, settler-colonialism and apartheid.

The strength of the Palestinian cause lies in its moral and humanitarian appeal, and this must always be protected! Like the peaceful and non-violent BDS movement, we need to be more creative in mainstreaming effective peaceful initiatives for Resistance to invite the progressives of the world to join the Resistance. Resistance is a right, a duty and an expression of our human dignity. International law grants a people fighting an illegal occupation the right to use “all necessary means at their disposal” to end their occupation.

Israel's position continues to weaken and its belligerent ways are not unstoppable. But it needs the international community and civil societies to come together and pressure this rogue nation into a genuine and just solution.

The words of Nelson Mandela ring true. "The world will never be free until Palestine is free."

We can and we must win. Viva Palestine 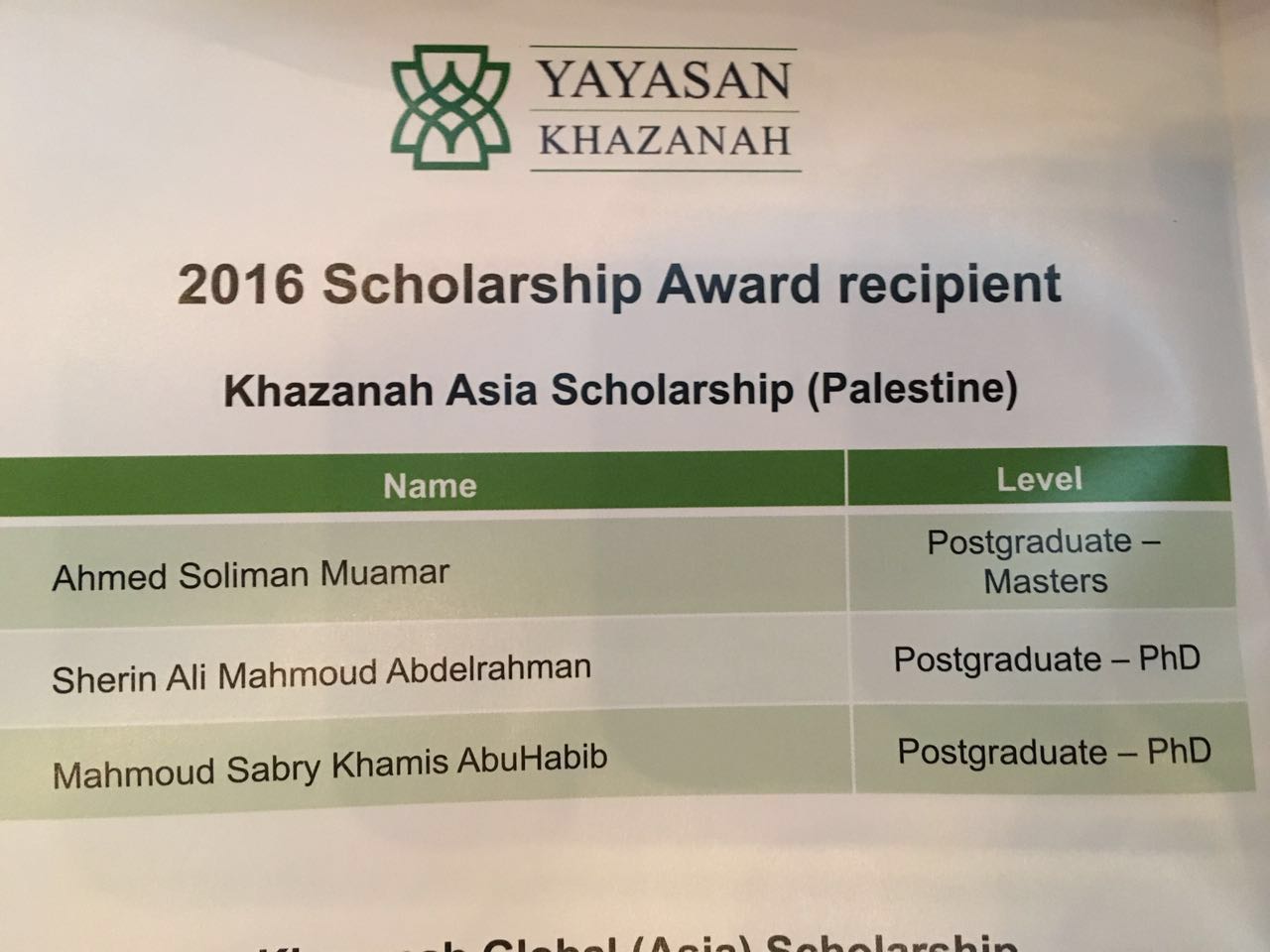 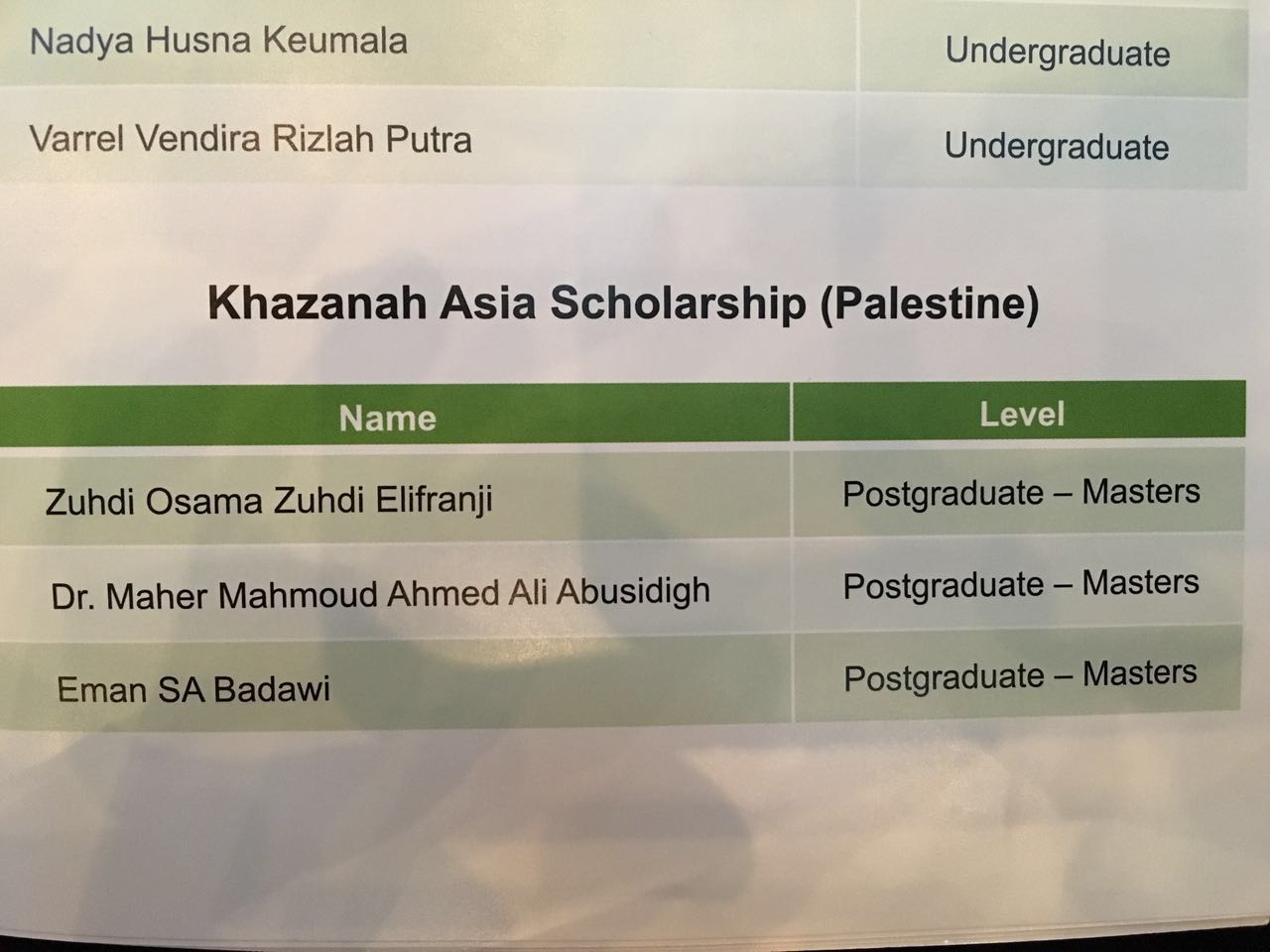 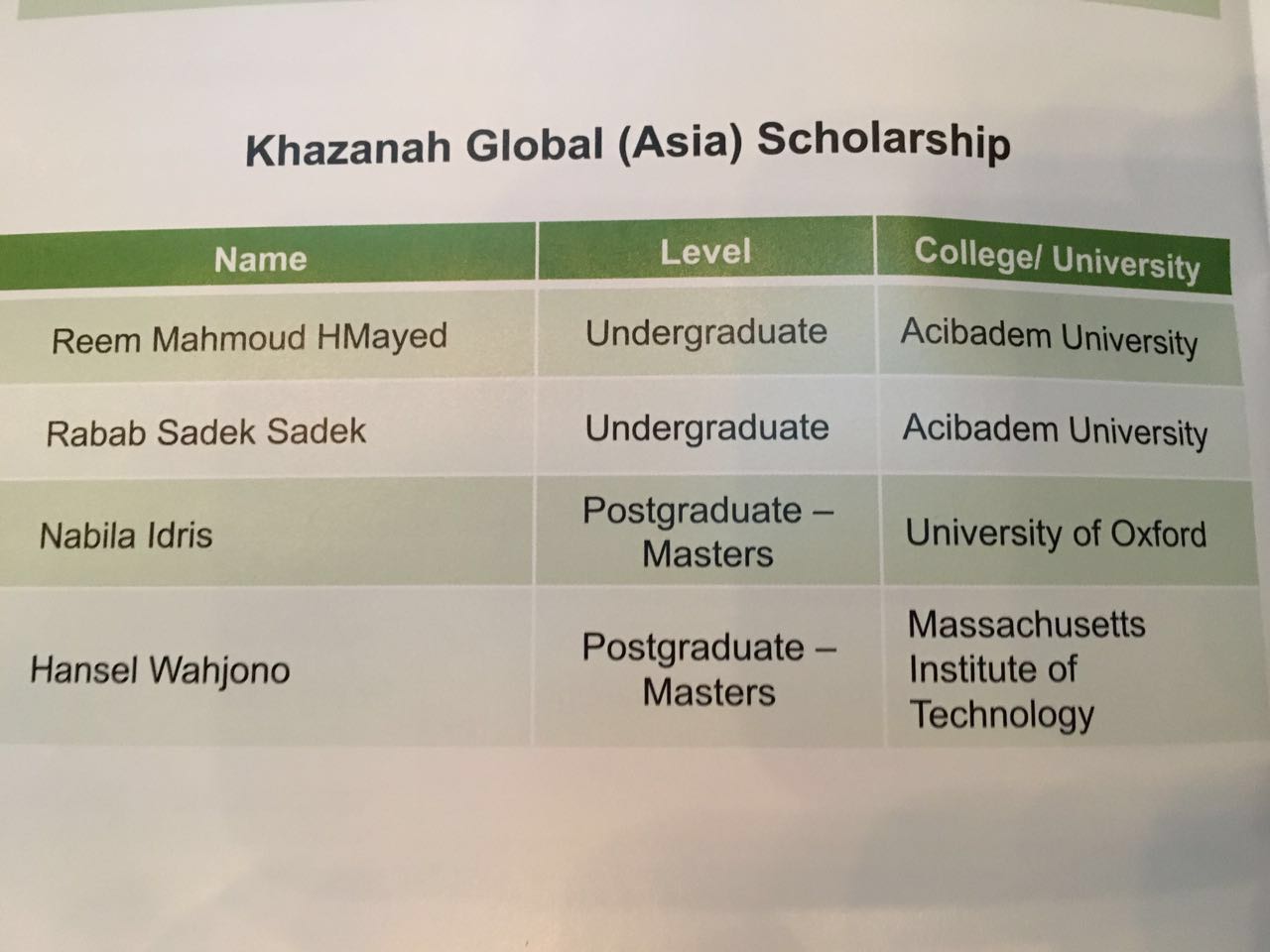 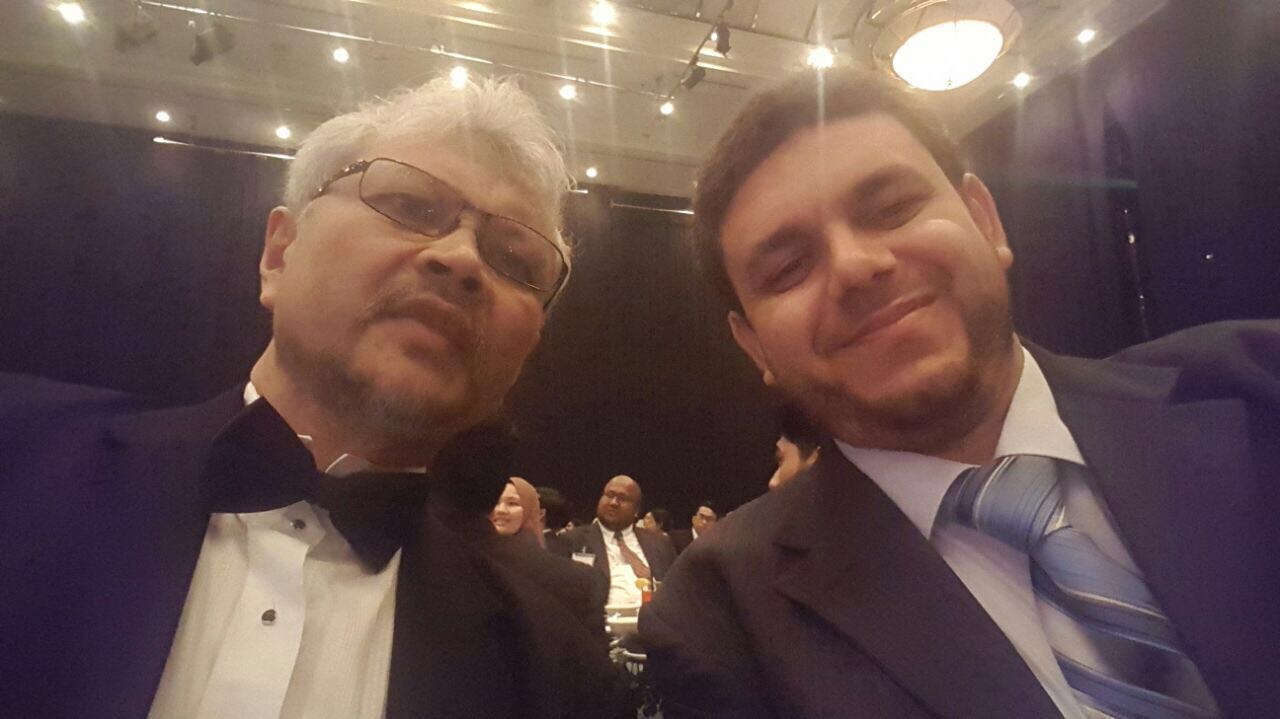 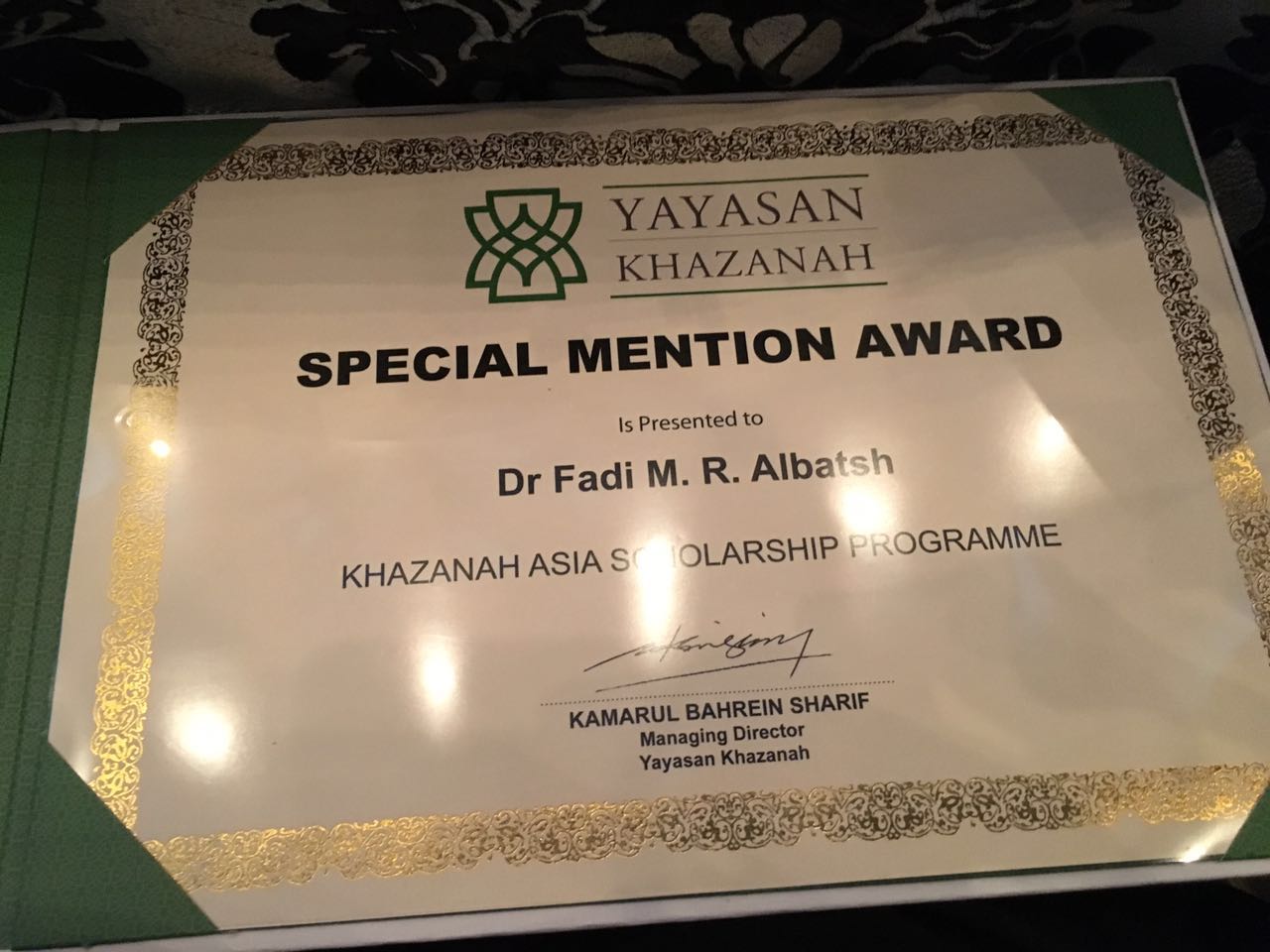 I am seated with Al Hafiz Dr Fadi one of three recipients of this ivy scholarship in 2013. He is tonight one of the high achiever award recipient! And he won one of the 4 top awards. 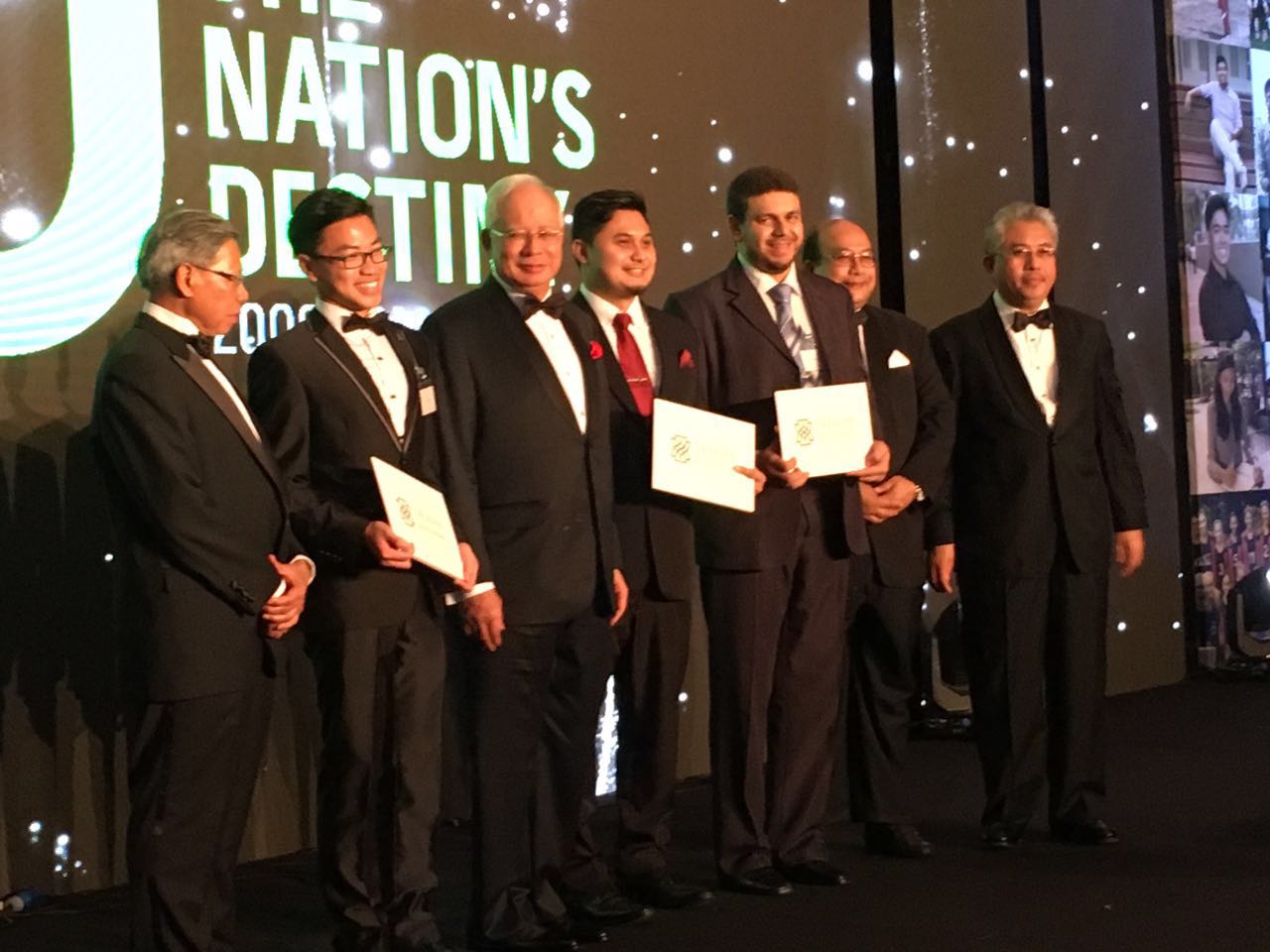 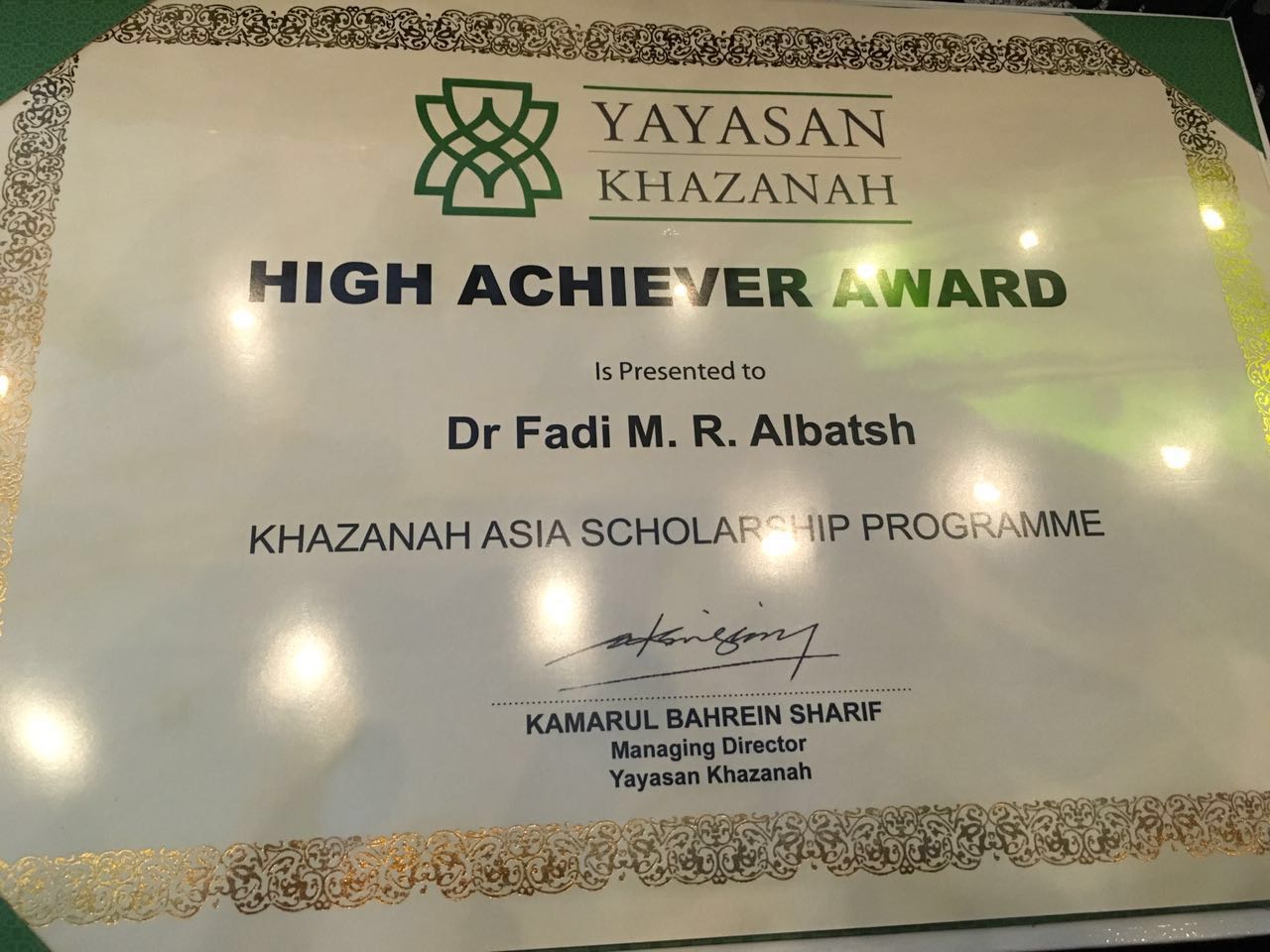 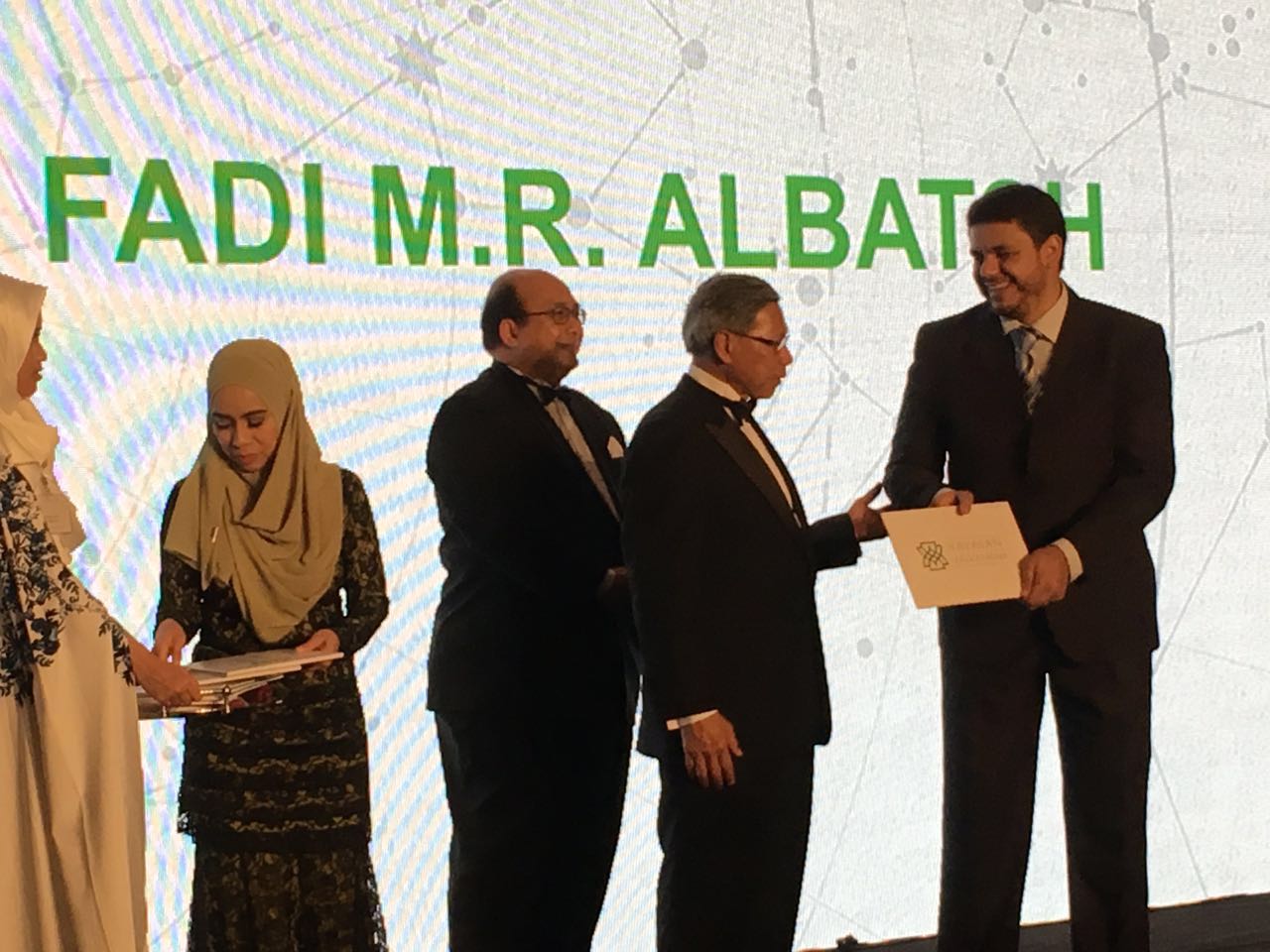 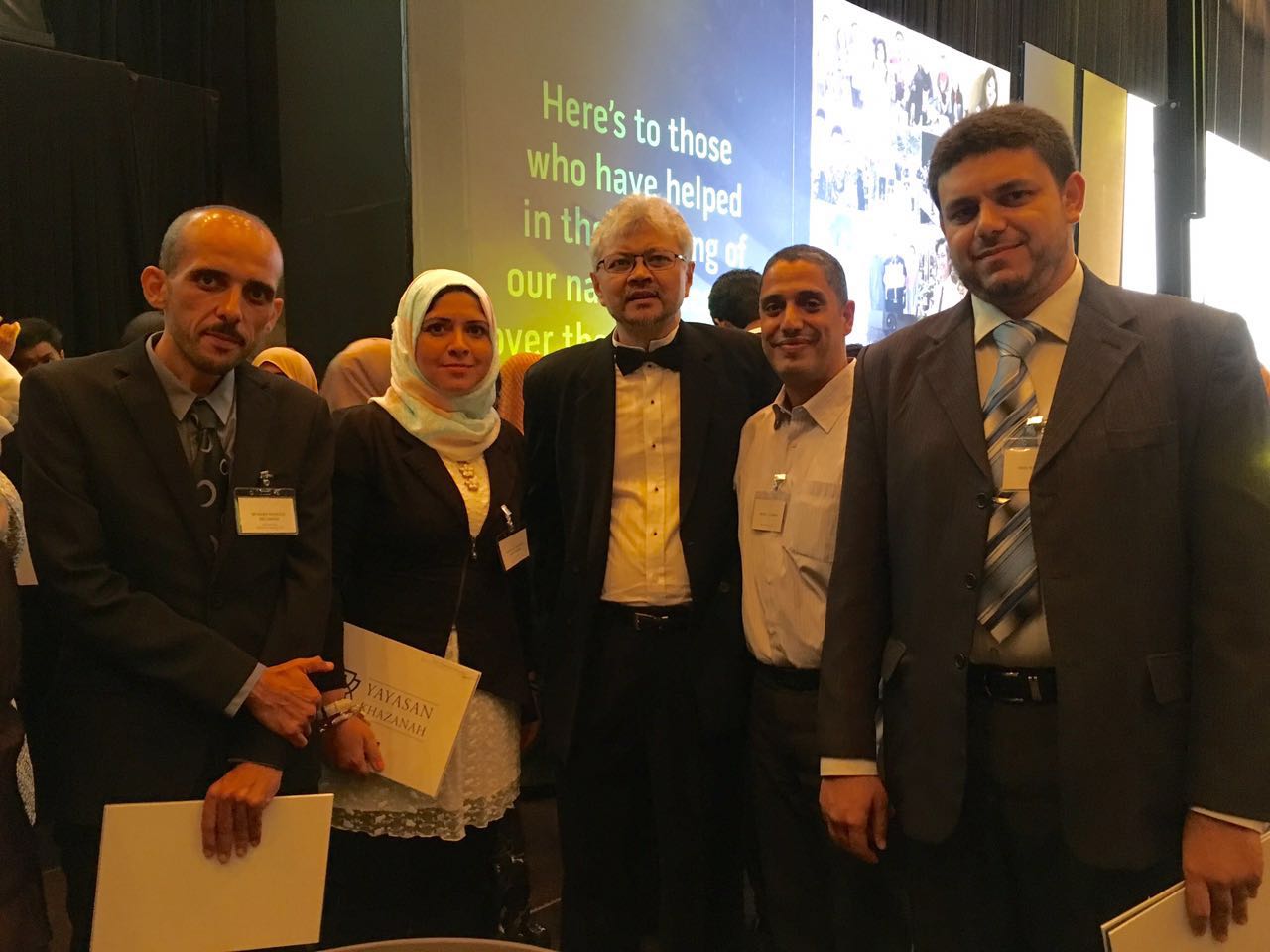 For 2016 there were 6 Palestinian winners. The sister and guy to my right. 4 yet to arrive out of Gaza & West Bank! 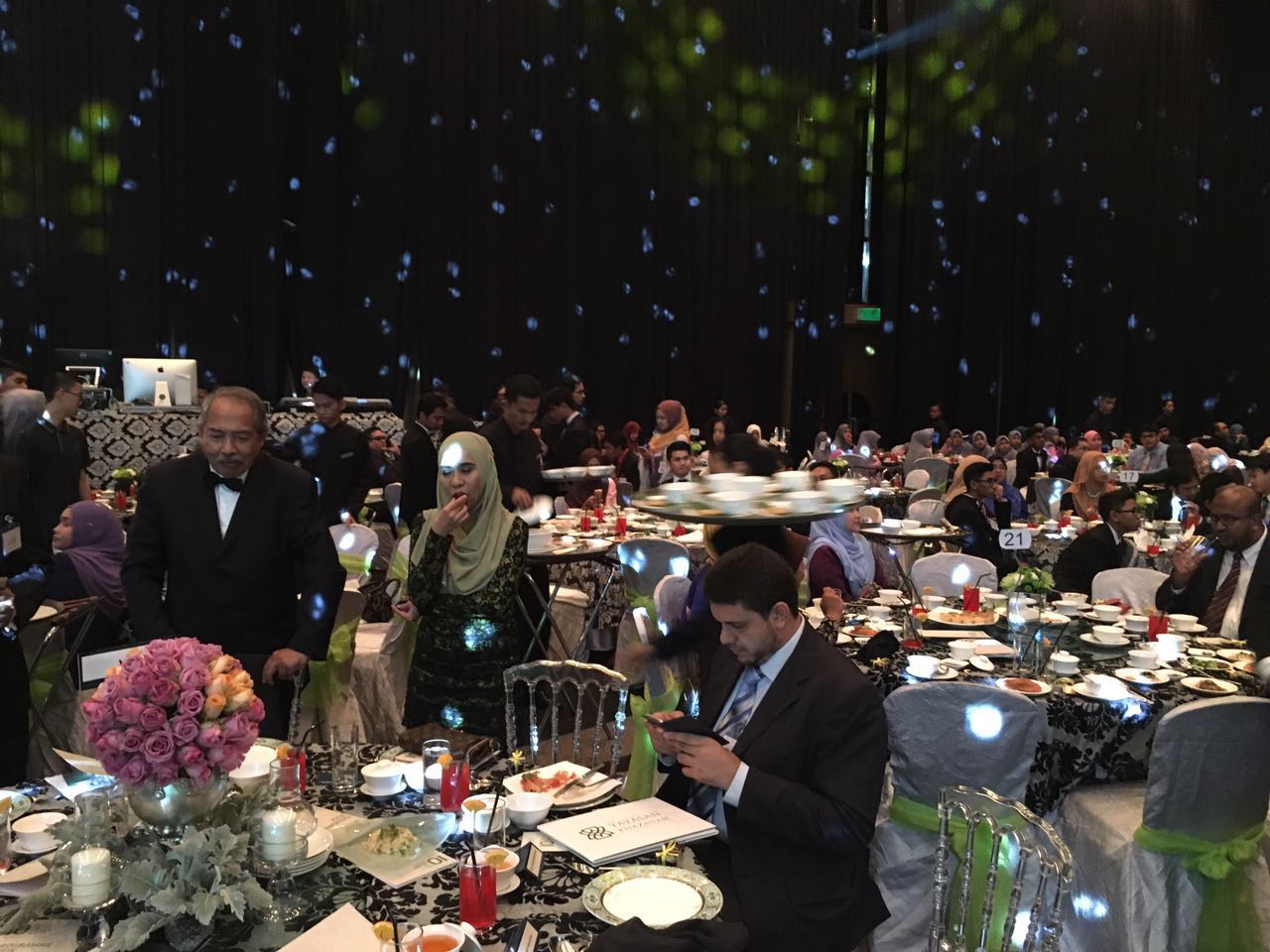 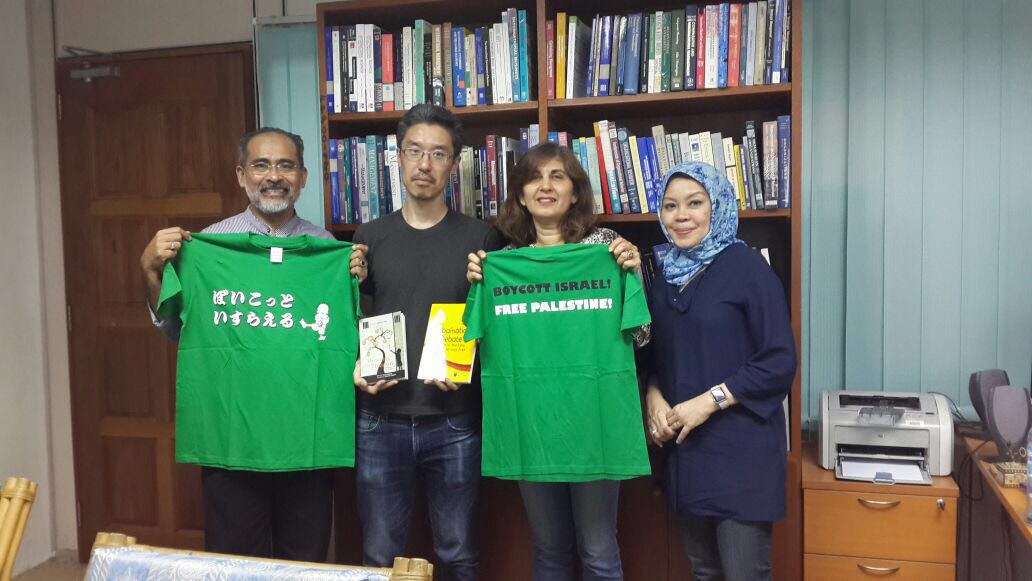 We are utterly surprised and extremely dismayed at the suggestion of the former IGP, Musa Hassan, linking the recent spate of Malaysian involvement in terrorist activities with their taking of the Palestinian cause to the extreme (Former IGP tells police to take IS threat seriously. FMT, July 5, 2016 http://www.freemalaysiatoday.com/category/nation/2016/07/05/former-igp-tells-police-to-take-is-threat-seriously/

It is a very simplistic notion on the radicalization of Muslims, resident in different parts of the world and sweeping across different social strata. The contributory factors are undoubtedly multi-factorial and to conflate them with legitimate fervor for the just Palestinian cause is very naive and reductionist.

Among other reasons, IS (Islamic State of Iraq and the Levant) has a very savvy and sophisticated online and social media presence which lures their victims towards their grandiose theology of the utopian global caliphate, ruled by Shari’ah law which claims religious, political and military authority over all Muslims worldwide. Once locked in, they are brainwashed into thinking the kafir harbi (non-believers) and the hypocrites among the Muslims can be legitimately killed because of their infidelity and aggression towards the Islamic state.

It cannot be denied that a miniscule number of the Muslim radicals support the Palestinian cause but the majority of pro-Palestinian activists are lay Muslims and non-Muslims who empathize with the legitimate struggle of Palestinians against the unjust and illegal occupation, colonization and subjugation of the Palestinians by Zionist Israel. IS and al-Qaeda et al has been virtually silent on the Palestinian struggle. IS has done absolutely nothing positive for Palestinians on the ground. Instead, their war has been against all infidels and Muslims who do not subscribe to their extremist theology, as the recent terrorist attacks in Malaysia, Indonesia, Saudi Arabia has testified. The Zionist state of Israel has been spared of their theology of hate, vengeance and murder.

The Palestinian cause is grounded on universal human rights and is supported by all peaceful and reasonable people who categorically oppose all forms of racism, including Islamophobia and anti-Semitism. This is in stark contrast to the extremist and hostile theology of IS which has hijacked, abused and infinitely harmed the image of Islam.

The former IGP’s sweeping statements which lacked any substantial evidence is mischievous and irresponsible since by extension it would mean that those who support the Palestinian cause are potentially extremists or worst, terrorist. This surely adds to Israel and her allies attempts to defame Palestinians and Palestinian activists worldwide as terrorists.

We urge him to retract his ill thought statements. Notwithstanding, our activism would continue unabated and we call upon all Malaysians to stand in solidarity with the Palestinian popular resistance until Israel:

1.      Ends its occupation and colonization of all Arab lands occupied in June 1967 and dismantles the Apartheid Wall;
2.      Recognize the fundamental rights of the Arab-Palestinian citizens of Israel to full equality; and
3.      Respect, protect and promote the rights of Palestinian refugees to return to their homes and properties as stipulated in UN Resolution 194. 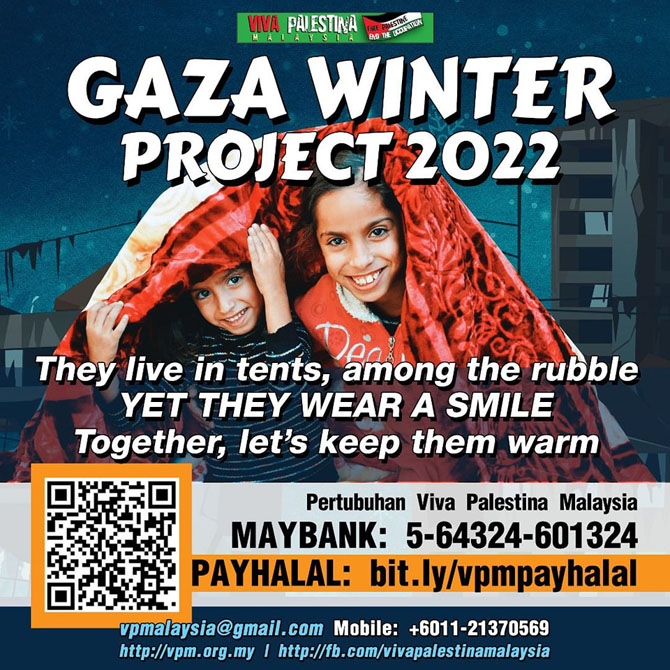