Pre KLPFF publicity and press conference to introduce and promote KLPFF2014 was held on 2 Sept 2014 with Yuzaidi Yusoff, VPM media maestro and our lovely guests Ms Yasmine Perni, Ms Laila el- Haddad n Ms Sameeha Elwan. John Hirsch from the Wall Street Journal interviewed Yasmine Perni, the Italian film maker whose movie The Stones Cry Out about Christians in Palestine sufffering under the occupation will be screened at the KLPFF2014.

Laila introduced The Gaza Kitchen which will be available for sale at KLPFF 2014.
It was a good event and the women from VPM and the women guests of VPM stood in solidarity with Palestine.
you can read NST coverage on KLPFF2014 at: http://www.nst.com.my/node/29501?m=1
More interviews live on TV on MHI and ffor article in Life & Times NST
There was a good interview on BFM and you may listen to interview here: 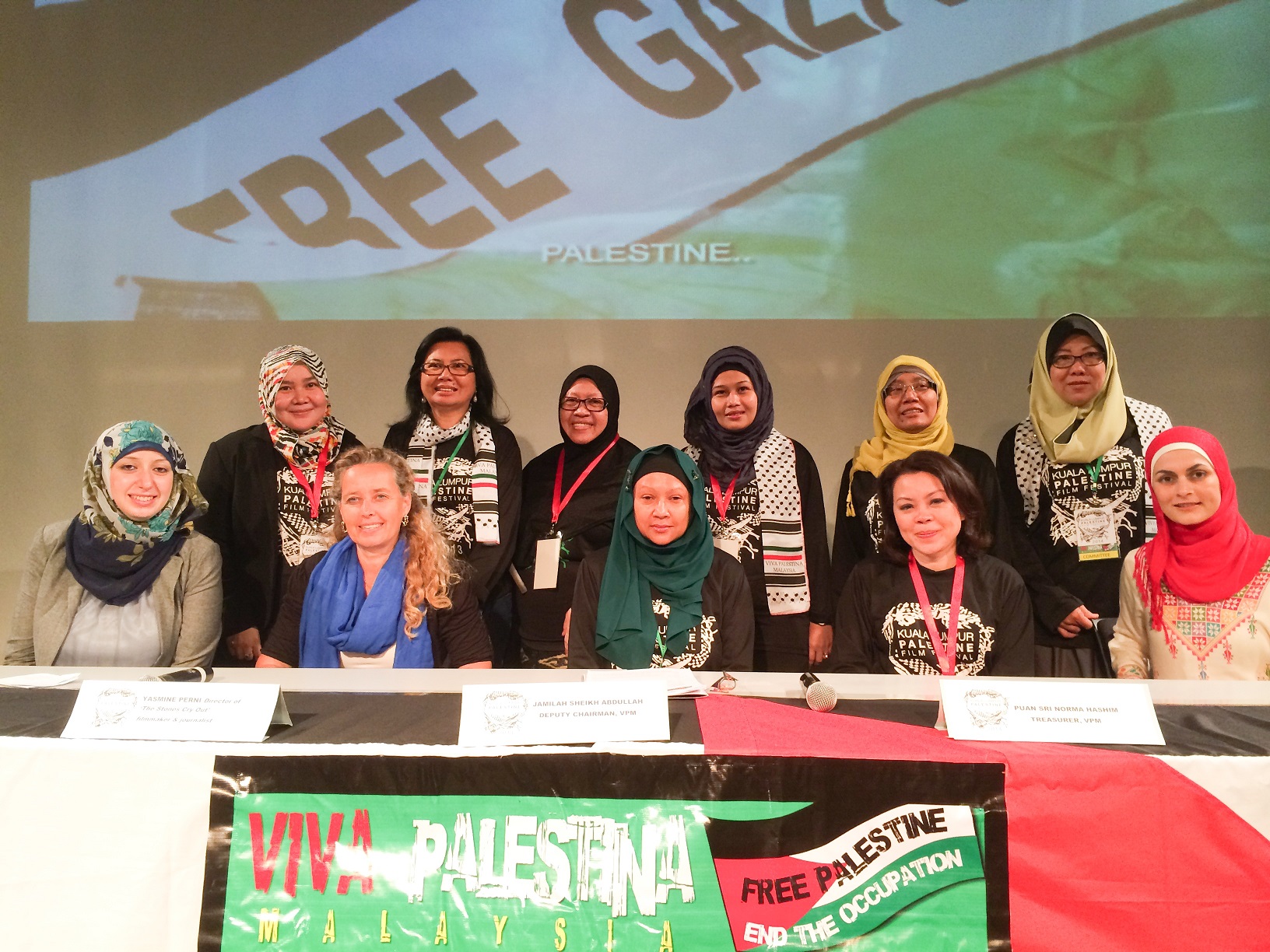 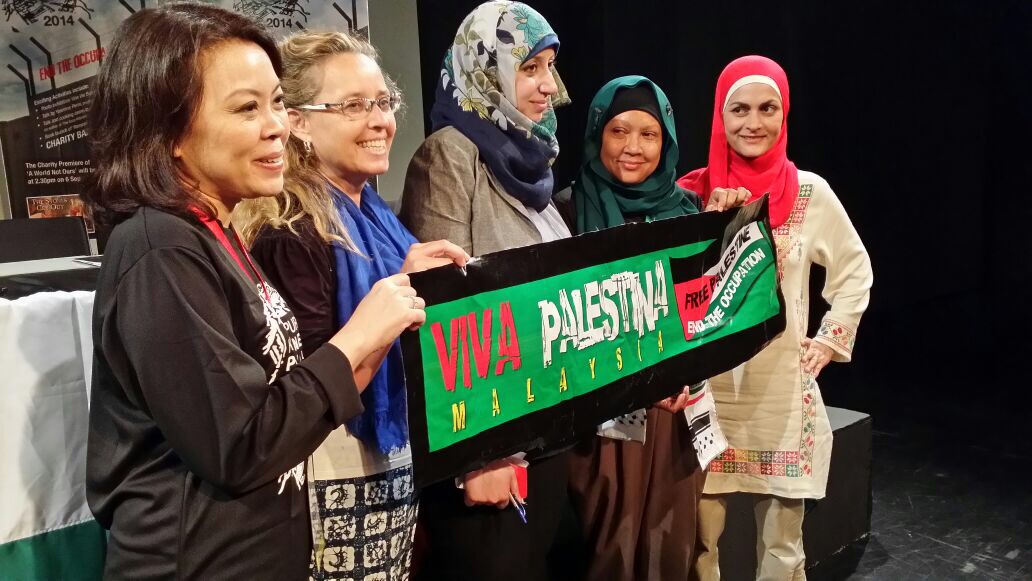 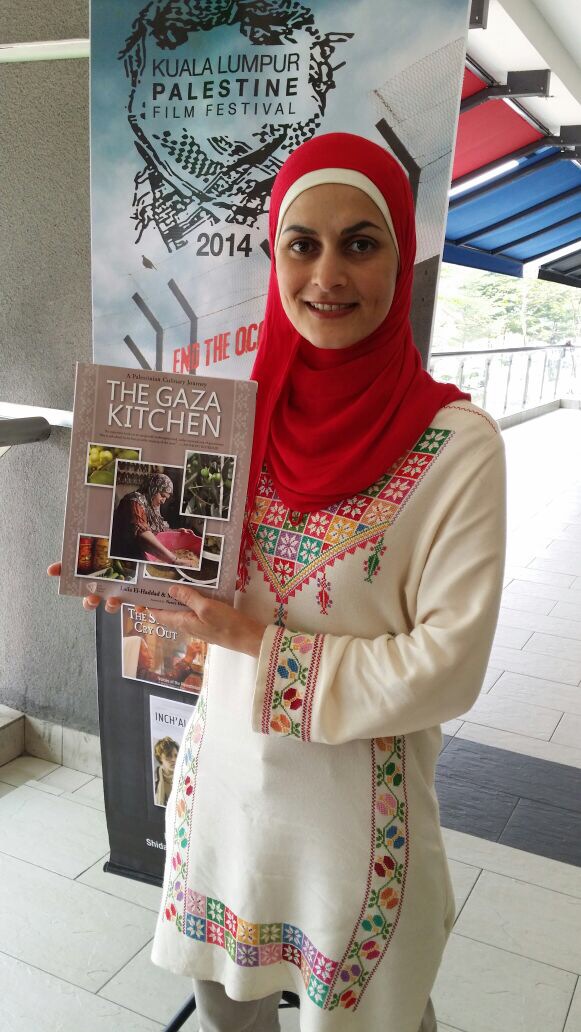 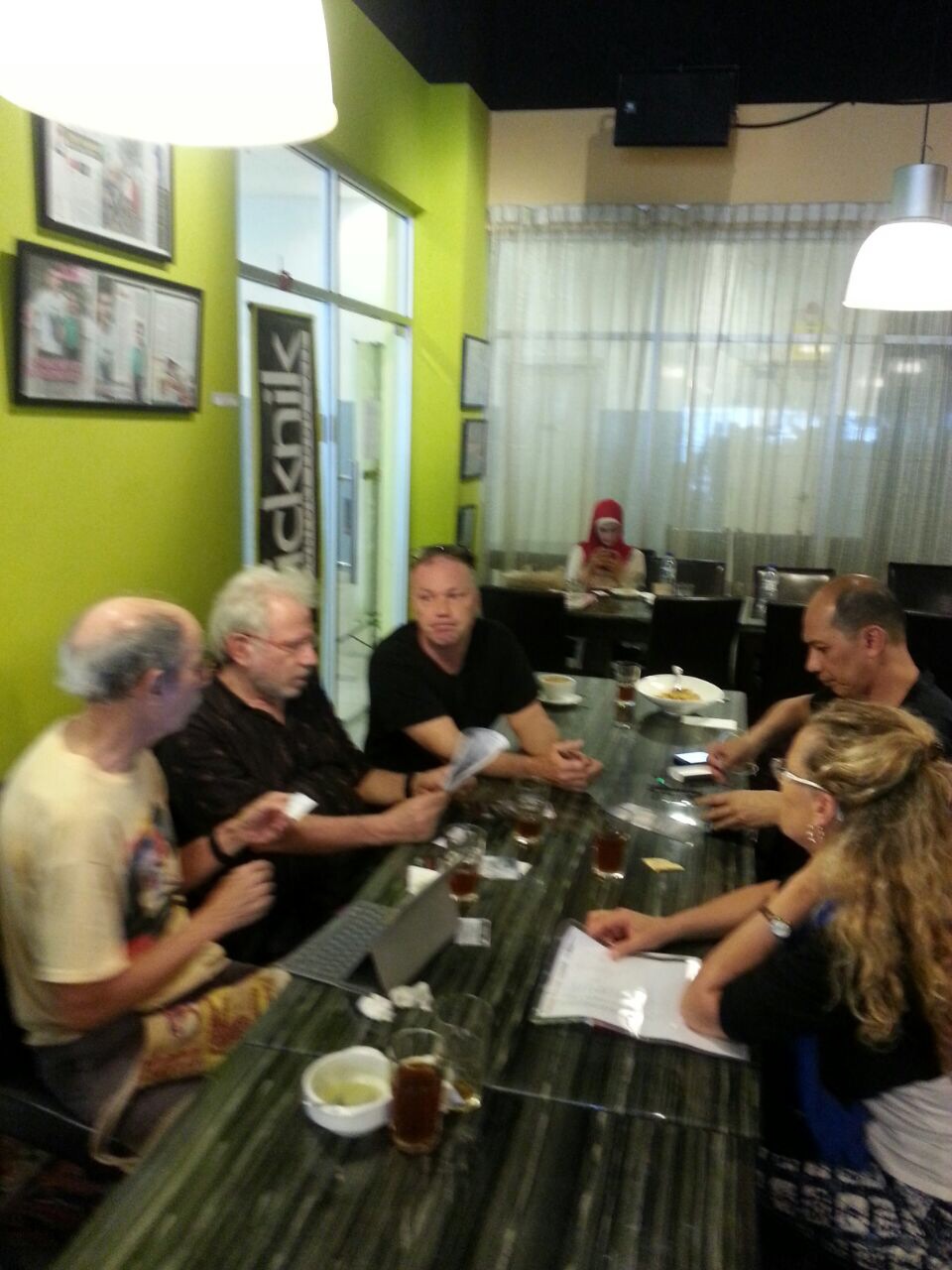 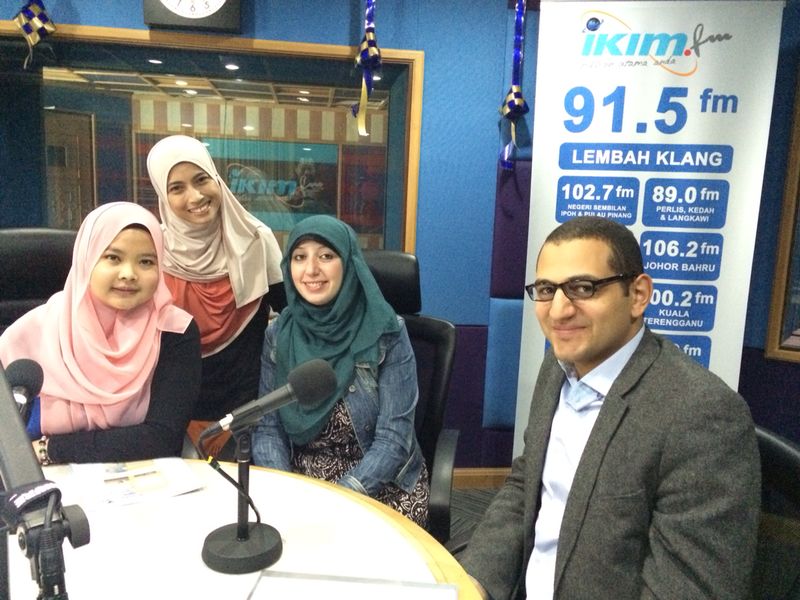 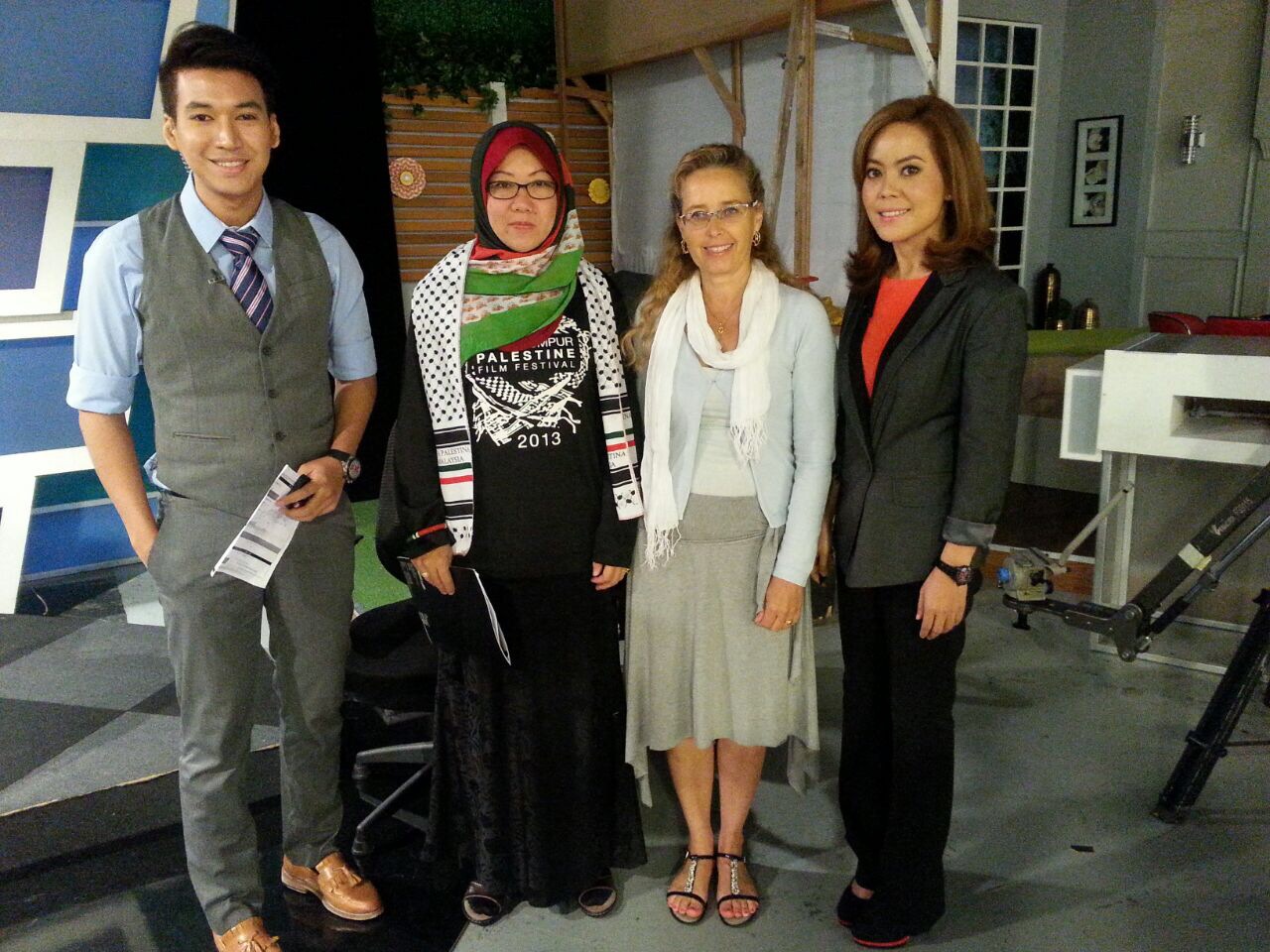 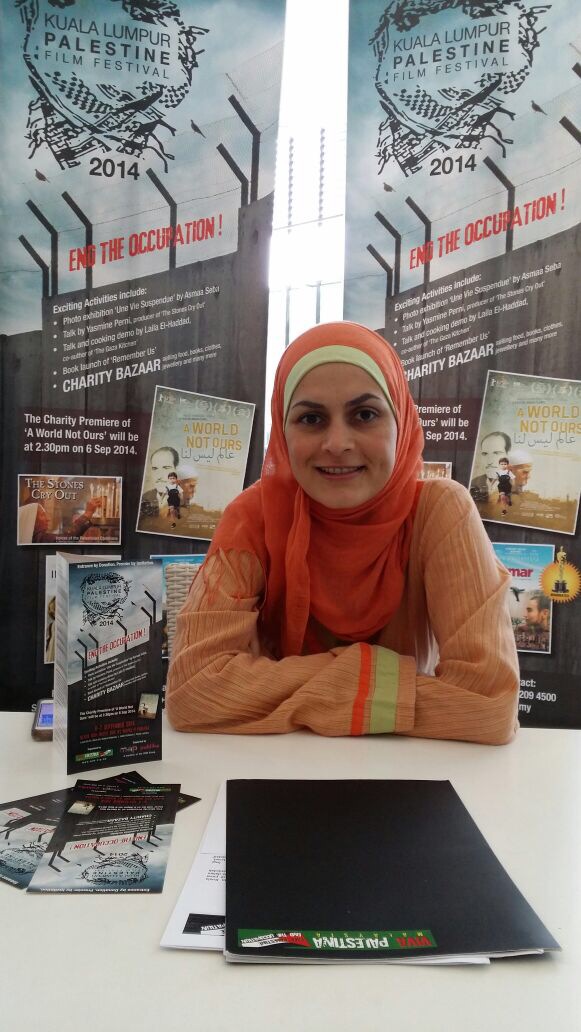 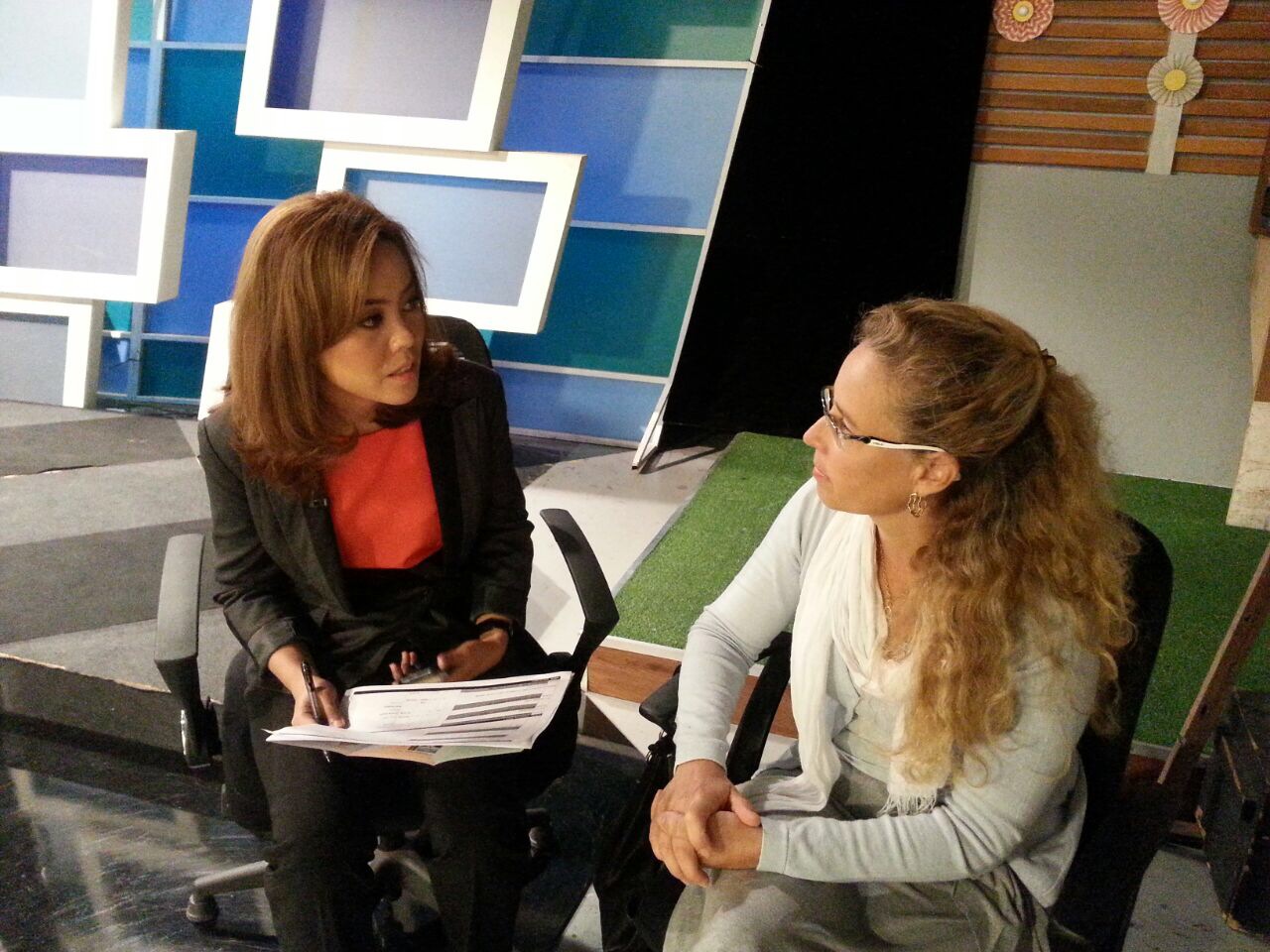 Interesting article in The Edge on the documentary 'The Stones Cry Out' to be screened at KLPFF2014 : http://www.theedgemalaysia.com/lifestyle/305619-film-a-film-festival-with-a-cause.html 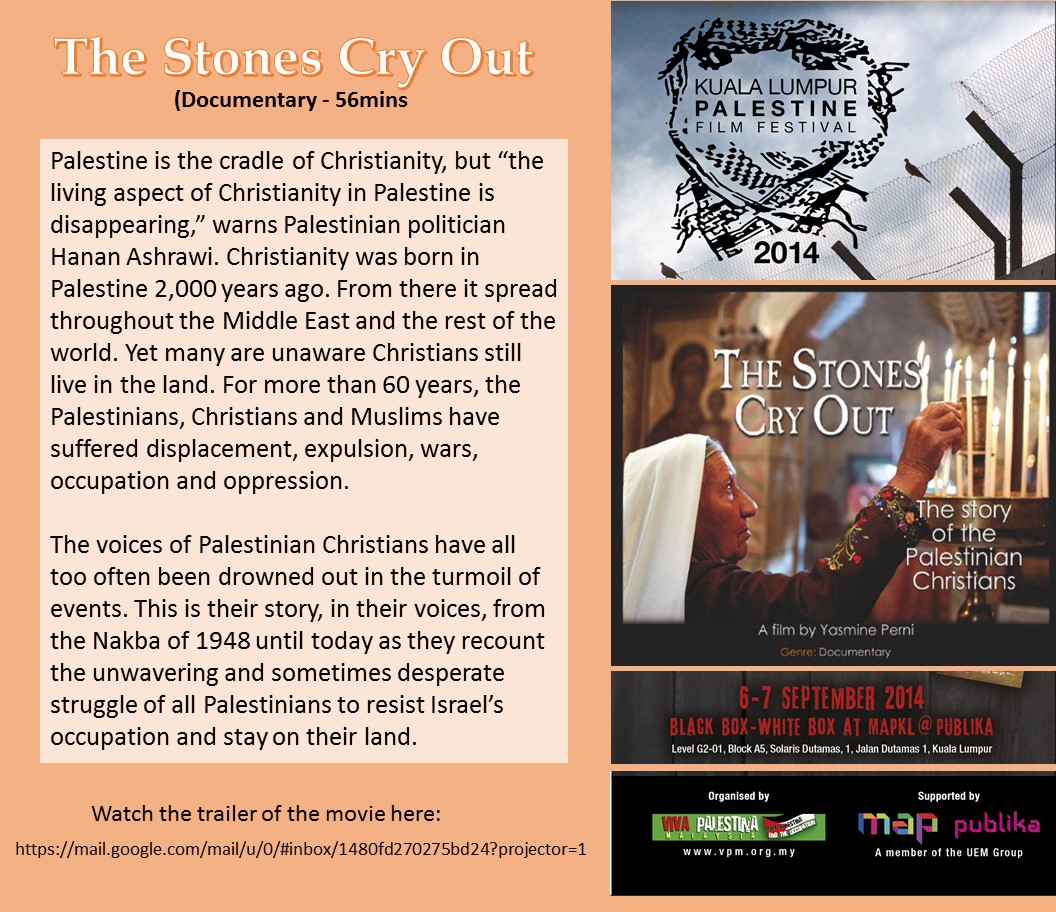 THE scene opens with men and women dressed in traditional Arabian garb,  typically associated with the Muslim faith, entering a church. They are Catholics and in the scene, they observe the order of a mass being conducted,using Arabic bibles.This was the first few scenes in the documentary The Stones Cry Out — one of  four films to be screened at the Kuala Lumpur Palestine Film Festival 2014 (KLPFF) to be held this weekend at Publika, Kuala Lumpur.The scene — and the entire 50 minutes of the film — as director Yasmine Perni intended it to be, was thought­provoking, to say the least.Speaking to the media at a press conference, Perni says she wanted to highlight the fact that for more than 60 years, the Palestinans — both the Christians and Muslims — had suffered displacement, expulsion, wars, occupation and oppression, particularly in the conflict zone of the Gaza strip.As such, she believes, the voices of Palestinian Christians have all too often been drowned out in the turmoil of events. The Stones Cry Out, Perni adds, is their story, in their voices, from the Nakba of 1948 until today.Told through the eyes of those who lived through the horror, the first 20 minutes of the documentary set the tone for what can be expected for the rest of the movie. Perni said that she made the film for two reasons; one was to create awareness that Christians exist in the Palestine populations.“They (Christians) are very much a part of the fabric of Palestinian society. Very often they are forgotten.“They live in the same villages, speak the same language and follow the same education system. They are one people, basically. And to try to divide them is counterproductive and in fact, has backfired,” Perni told journalists.The other reason was to break stereotypes. She wanted to show Palestinians in their daily life, as opposed to the constant footage and pictures of them being viewed as poor, refugees or terrorists.“I want to show what Palestine was before 1948. They owned houses, cars, farms and what everybody else had. The poor, downtrodden pictures that you see now are the reaction of the 66­year conflict, but that was not how they were before,” she stressed.Perni, is just one of the four invited guests that will be in town for this weekend’s festival. The other invited guests for KLPFF 2014 are social activist, political analyst and author of The Gaza Kitchen Laila El­Haddad, Sameeha Elwan who is contributing writer to the book ‘Remember Us’, and Seba Asmaa, a photographer whose works will be on exhibit during the festival.KLPFF will be held 11am­8.30pm on Saturday (Sept 6) and 10.30am­5pm on Sunday (Sept 7). Among the activities are cooking demos, a book launch, book reading, dance performances and of course, free screening of three other Palestinian movies. While to watch the movies are free, donations are always welcomed.This is the third instalment of the KLPFF, organised by Viva Palestina Malaysia (VPM). To date, VPM has raised an estimated RM7.5 million to finance various medical, educational, micro­financing, and women’s projects in Gaza to provide emergency relief.Like other years, donations to KLPFF are chanelled towards humanitarian efforts but this year, VPM decided to expand its festival to more than just film­screening. Visitors to KLPFF 2014 are encouraged to partake in efforts to help Gaza by purchasing clothes, accessories and food in the Bazaar for Gaza.Among the main objectives of this year’s KLPFF are to create awareness of the Palestinian struggles through cinema, arts and culture, to raise funds for the purchase of medical and ambulance facilities and to fund the second phase of the Rebuilding of Gaza. Omar which was a nominee for this year’s Academy Awards in the Best Foreign Language category, will also be screened at the festival.
< Prev Next >