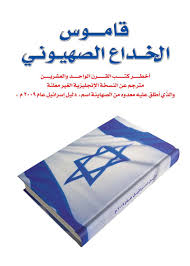 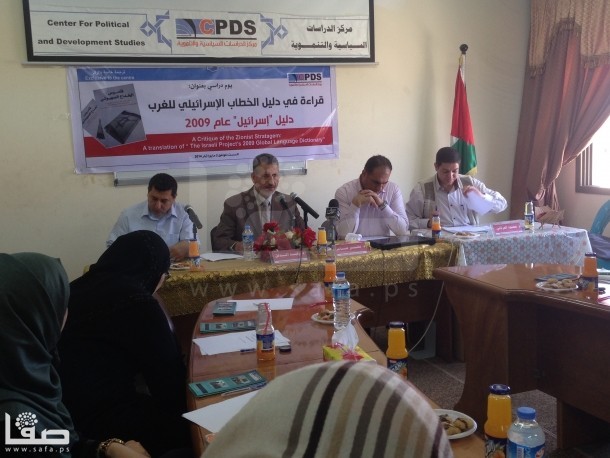 Gaza,(CPDS.ps) —The Centre for Political and Development Studies (''CPDS'') held Saturday , May 3rd , 2014 a study-day entitled '' An overview over the Israel project's 2009 Global language Dictionary ,''  in which many prominent researchers and academics as well as representatives of Media institutions, national parties  and think tanks took part.

Being authorized by the Israeli theorist, Frank Luntz, "The Israel project's 2009 Global language Dictionary" is a book addressing influential media discourse, where it highlights a lot of aspects that mark influential political and media discourse. It is basically  directed to the Israeli senior officials as well as  spokespersons, aiming to serve Israeli narrative to be convincing, rational and accepted by all targeted audiences particularly, people of America and Europe .

Recognizing the seriousness of such 18-chapter dictionary as it includes many manipulation terms aiming to forge the facts and tamper the real narrative to serve Israeli agenda; Researchers stressed the need to formulate a unified media strategy to counter such false Israeli propaganda.

CPDS Deputy Chairman, Mahmoud al-Harthani who supervised the book translation, stated that such studies are so crucial for the Palestinian people to grasp, so that they can deal with the Israeli discourse and be aware of penetration points and influential methods to get to the Western society.

Moreover, the researcher in western media, Dr Moshir Amer affirmed that conflict with Israeli occupation must be addressed from humanitarian aspects that expose Israeli crimes, which are in violation of international and humanitarian law.

The Chairman of CPDS, Dr Walid Modallal, in addition, who is a specialist in political and international affairs, recommended the fact that there is an urgent need to formulate a similar Palestinian discourse dictionary so that Palestinian official and spoke persons can use to impugn the Israeli narrative that forge realities and manipulate facts. He stressed that Palestinian terms must be flexible and accommodate a rational media discourse that complies with civilized discourses.

For his part, the instructor in al-Azhar university, Dr Mukhaimar Abu Sa'eda, stressed in his paper that Palestinians have the real honest narrative and they can use aspects of the right media discourse to communicate with the west and refute Israeli false narrative.

Furthermore, the researcher Asa'ed Abu Shrekh , highlighted the importance of " Boycott, Divestment and Sanctions " campaign in the struggle against Israeli occupation.

Dr Ahmed Yousef, the chairman of Bayt Alhekma Institute, said in his paper, that the need is urgent to formulate a similar version to face Israeli incitement against Palestinian Islamists and attempt to refer them to al-Qaeda. He confirmed that such similar study will refute Israeli lie, whereas such step needs wise treatment to conclude to a strategy that put Palestinians on the right way to get their legitimate rights including self-determination.

Likewise, the Undersecretary of the Ministry of Foreign Affairs, Dr Ghazi Hamad stressed that the Palestinian people as well as national parties should have a single national vision to adopt in the media discourse directed to the west.

Dr,  Hazem Sharawi, the researcher in CPDS , concluded that CPDS is going to develop  a similar study in order to find a base from which , Palestinian officials and meant people can release in addressing the west .